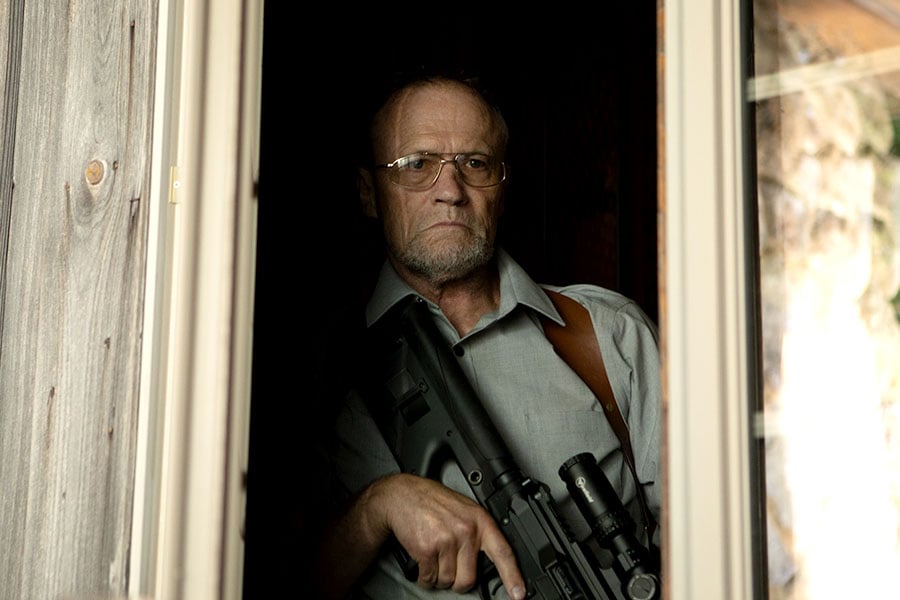 When two cops witness an assassination attempt, Gabriel Tancredi, an ex-marine turned mob henchman (Michael Rooker), is ordered by his ruthless mob boss (Bruce Willis) to eliminate all threat. With an underling eager to prove himself, rival gangs on the move, and a growing death toll, every step Tancredi takes threatens lives…including his own.

Text “CROWD” at 31403 before 9 p.m. on Tuesday, August 2, for a chance to win the thriller, White elephant, starring Michael Rooker and Bruce Willis. Three winners will each receive a copy on Blu-ray™. White elephant is available on DVD and Blu-ray™ starting August 2, 2022 from RLJE Films. MPAA Rating: NR (Not Rated).

HOW TO WIN: No purchase necessary. Viewers should text the word “MOB” to 31403 by 9 p.m. on Tuesday, August 2, 2022. Winners will be randomly selected at 9 p.m. and will receive a confirmation text detailing how to claim the prize.

The registration deadline is Tuesday, August 2, 2022 at 9 p.m.
One entry per person; any duplicate entries will be disqualified. One winner per household.
If the user is not already a WCCB VIP Text Club member, they will be prompted to register and will receive up to 2 messages/requests.
Users can opt out of the WCCB Text Club by texting STOP to 31403 at any time.

ELIGIBILITY: No purchase necessary. To win, you must be 18 or older and a legal resident of North or South Carolina. No employee of RLJE Films and their affiliate artists and promoters (“Sponsor”) or WCCB-TV (“Station”), their affiliates, spouse or immediate family members and/or those living in the same household of each will be eligible to win. Immediate family members include, but are not limited to, parents, brothers, sisters, nieces, nephews, aunts, uncles, cousins, and grandparents. Employees or relatives of employees of any Charlotte Nielsen DMA or Charlotte Arbitron ADI television or radio station are not eligible to win. In addition, Station reserves the right to disqualify any other person from participating in the contest if such participation would compromise or give the appearance of compromising the integrity of the contest. No one shall be eligible to win any competition organized by the Station more than once during a sixty day period.

No responsibility is assumed by WCCB, their respective affiliates, parents, partners or other suppliers for lost, late, misdirected or illegible entries or for any computer, online, telephone or technical malfunction that may occur.

Messages and data rates may be applied. The frequency of messages varies. Auto-dialed marketing messages will be sent to the mobile number provided during registration. Consent is not a condition of purchase. Terms and conditions and privacy policy: wccbcharlotte.com.

1) Winner’s consent to the use of their name, likeness and/or voice without further compensation for the Station’s or Sponsor’s advertising, public relations and promotional purposes. By entering the Contest, winner grants Station and Sponsor all perpetual rights to broadcast or distribute their name, likeness, and/or voice, in any edited, distorted, or modified form executed by Station, in any media , including but not limited to broadcast television. , radio and Internet, without further compensation.

2) Station and Sponsor accept no liability for loss or damage arising in whole or in part from the awarding, acceptance, possession, use or misuse of the prize or to participate in the competition. Winner releases Station and Sponsor, their affiliates and employees from all liability and claims.

3) Messaging and data charges may apply. The frequency of messages varies. Auto-dial marketing messages will be sent to the provided mobile number and can receive up to 2 messages/requests upon activation. Consent is not a condition of purchase. Text HELP for help. Text STOP to cancel. Terms and Conditions and Privacy Policy: wccbcharlotte.com/terms.

4) Prize is non-transferable and non-assignable. Prize cannot be replaced with cash value. Station’s decision regarding all matters relating to the Contest, including matters not specifically addressed in these Rules, shall be final. Prize not claimed in accordance with these rules will be forfeited and an alternate winner will be selected by another random draw.

5) Apple is not a sponsor or involved in the contest activity in any way.

6) While every effort is made for pricing accuracy, film format (Blu-ray™, DVD, digital, etc.) may change without notice.

7) Winners will be notified by text no later than one hour after the competition deadline with instructions on how to claim the prize. Prize must be claimed within 4 weeks of notification. Please do not report to the station unless instructed to do so.

Don’t even try! It’s a terrible risk if you’re desperate not to…