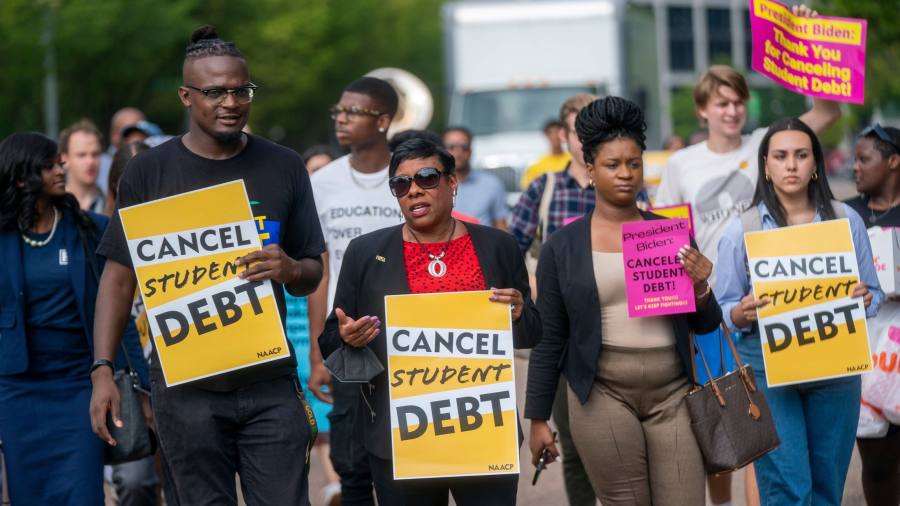 A US federal judge has blocked Joe Biden’s plan to write off thousands of dollars in student loan debt for millions of Americans, dealing a blow to a White House policy targeting a major concern among young voters.

A spokesman for the US Department of Justice said the government would appeal the decision.

“For the 26 million borrowers who have already provided the Ministry of Education with the information needed to be considered for debt relief – 16 million of whom have already been approved for debt relief – the Ministry will retain their information so that we can quickly process their relief once we win. in court,” White House spokeswoman Karine Jean-Pierre said in a statement.

“We will never stop fighting for the hardworking Americans who need it most – no matter how many roadblocks our adversaries and special interests try to put in our way,” she added. .

The decision comes as the Democratic Party celebrates a stronger-than-expected performance in Tuesday’s midterm elections, when a crushing Republican “red wave” predicted by pollsters failed to materialize. Young voters turned out in force, helping boost Democrats in some key races, and activists said student debt relief was one of many issues motivating them.

The plan proposed by the Biden administration would eliminate up to $10,000 in debt for people earning up to $125,000. The nonpartisan Congressional Budget Office estimated it would cost more than $400 billion.

Elaine Parker, president of the Job Creators Network Foundation, the organization that filed the lawsuit in Texas on behalf of the plaintiffs, said in a statement that the court “correctly ruled” in their favor and that the decision “protects the rule of law”. Job Creators Network was founded by Republican donor Bernie Marcus.

The case in Texas stems from a challenge brought against the US Department of Education by two people who attended universities in that state. The plaintiffs argued the debt cancellation program violated U.S. law because the government agency made ‘arbitrary decisions’ on issues including which people – as well as the type and amount of debt – would be included in the program, without seeking public comment.

One plaintiff, Myra Brown, said she was excluded from the initiative because it does not apply to commercially held loans that are not in default, while another, Alexander Taylor, was not eligible for complete debt cancellation because he did not receive a federal grant. which is generally granted to needy students. Taylor argued it was ‘unfair’ that her debt forgiveness calculation was based on her parents’ financial situation years ago.

“If the Department is going to seek cancellation of the debt, the plaintiffs believe that their student loan debt should also be cancelled,” the complaint states.

The case is part of a series of legal challenges brought against Biden’s program, which drew cheers from progressive Democrats when it was announced in August. Republicans and some moderate Democrats have said they fear it could potentially exacerbate inflation.

Optima Automobile Group Holdings (HKG:8418) has debt but no profit; Should you be worried?

Cartel-linked drug dealers sentenced to prison; Lewis County among the areas where the group operated