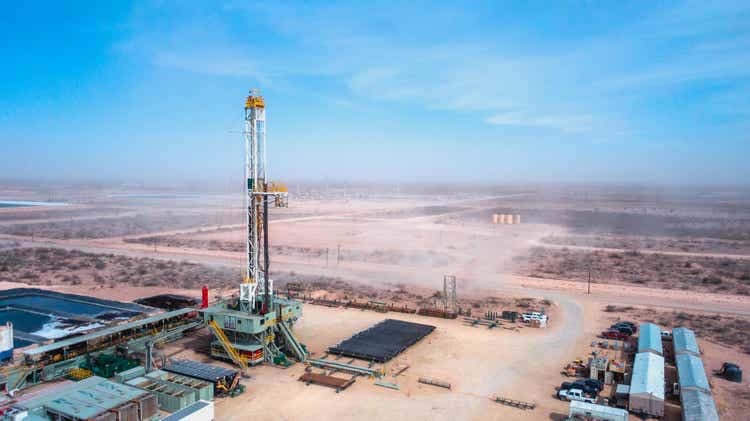 On Thursday, January 27, 2022, Pittsburgh natural gas producer CNX Resources Corporation (CNX) announced its fourth quarter 2021 results. Any investor reading the press release no doubt saw a lot to like, as the company has more than doubled its revenue year over year and posted very strong earnings per share. A closer look at the earnings release further reveals that the company has joined many of its shale energy peers in its drive to maximize free cash flow, something for which I have applauded many others. companies in several recent articles. Although the company’s shares rose somewhat in the trading session following the earnings results, there is reason to believe there may be room to run as there is certainly plenty to love here.

It seems certain that the first thing anyone looking at these highlights will notice is that virtually every measure of financial performance showed considerable improvement over the prior year period. One of the main reasons for this is that the price of natural gas was significantly higher during the fourth quarter of 2021 than it was during the fourth quarter of 2020:

This is hardly a surprise to anyone who heats their home with natural gas, as these higher prices have strained the budgets of many families during this cold winter. This is reflected in the prices realized by the company as it received an average of $5.24 per million BTUs this year, but only $1.90 per million BTUs last year. It should be fairly obvious that a higher price would increase the company’s revenue since the more it receives for each unit sold, the more it receives in total, all other things being equal.

Of course, all else is rarely equal in the energy sector. As noted in the highlights, CNX Resources also had higher production than last year. It also had a positive impact on his earnings for obvious reasons. After all, if the business has more products to sell and generate revenue, it will have higher sales, assuming prices don’t drop significantly. These higher revenues have provided the company with more cash to cover expenses, which ultimately allows more money to flow into the company’s cash flow and profits.

One thing we’ve seen with many shale operators is a willingness to let production stagnate in order to focus attention on generating free cash flow. Although CNX Resources has seen quite significant year-over-year production growth, it is certainly no exception to this shift in business model. The company said it expects to produce a total of 590 billion cubic feet of natural gas equivalent during 2022. This matches what the company produced in 2021:

This is a break with the old economic model of growth at all costs. However, it has several significant advantages over the old business model. The most important of these is that it allows the company to generate positive free cash flow because it solves one of the biggest problems in shale gas operations. The problem is that shale wells tend to have an incredibly high rate of decline. As I mentioned in a recent article, on average, a shale gas well will see its production decrease by 60% in the first year of operation and by 73% in the first two years. As a result, a shale gas producer must continually drill new wells in order to simply maintain, let alone increase, production. It’s an incredibly expensive proposition, and it’s one of the reasons the shale industry was the biggest emitter of junk debt before the pandemic. The new model in which companies do not focus their attention on generating growth allows them to generate positive free cash flow, which we can see in the results of CNX Resources. As noted in the highlights, the company generated $158 million in free cash flow, which marks the eighth consecutive quarter the company has achieved positive numbers here:

That’s a bit better performance than what other shale companies have seen. Although many of them now have positive free cash flow, they often failed to generate it in the first two quarters of 2020. So the fact that CNX Resources did this is very telling for the ‘business. A positive free cash flow has many advantages. The most important of these is that it allows the company to undertake a number of shareholder-friendly tasks since it is money left over from its ordinary operations after the company has paid all invoices and made all necessary capital expenditures. It is the money that the company can use for things like reducing debt, buying back stock, or paying a dividend. All of these things ultimately benefit shareholders. CNX Resources currently pays no dividends, but it did the other two things. For example, the company has repurchased 23.6 million shares of its own stock since Q3 2020:

One of the main reasons this is important is that debt is a riskier way to fund a business than equity. This is because the debt must be repaid when due and the company must make regular payments on its debt in order to remain solvent. Therefore, any drop in cash flow could put a company in financial difficulty if it is too indebted, which can be a particularly significant risk in the energy sector given the volatility of resource prices. Fortunately, the company’s debt reduction efforts have allowed it to reduce its year-over-year leverage ratio to 1.8x. This ratio, which is defined as Net Debt to Adjusted EBITDAX, basically tells us how long (in years) it would take the company to fully pay off its debt if it were to devote all of its pre-tax cash flow to this. task. A leverage ratio of 1.8x is certainly not bad and it is comparable to what its peers, like EQT Corporation (EQT), currently have. However, the company plans to improve this in the future, which we can very well appreciate.

Overall, there’s a lot to like about these results. However, someone buying today wants to ensure that they are receiving good value based on the future performance of the business. Fortunately, the stock appears to be significantly undervalued today. We can see this by looking at the price-to-earnings growth ratio. It is a modified form of the well-known price-earnings ratio that takes into account the growth of a company’s earnings per share. A growth P/E ratio below 1.0 indicates that the stock may be undervalued based on the company’s earnings per share growth forecast and vice versa.

According to Zacks Investment Research, CNX Resources will grow earnings per share at a rate of 41.58% over the next three to five years. This gives the stock a price/earnings growth ratio of 0.20 at the current price. This implies that the stock is significantly undervalued at the current price. Here’s how it compares to company peers:

As we can see, CNX Resources currently has a ratio that compares very well to its peers. This is especially true because many of the other companies listed here are not expected to generate future earnings growth. This attractive valuation reinforces the other very good things we are seeing in CNX Resources’ fourth quarter results and easily makes the stock worth considering for any energy portfolio.

In conclusion, there’s certainly a lot to like about CNX Resources’ fourth quarter 2021 results. The company has posted tremendous year-over-year growth across virtually every metric and looks set to continue that momentum as we head into 2022. The company has been focused on free cash flow, which which allowed it to reward shareholders through share buybacks and debt reduction. , although it has yet to institute a dividend like many of its peers have. Additionally, the company appears to be significantly undervalued at the current price, so it might be worth adding to your portfolio.